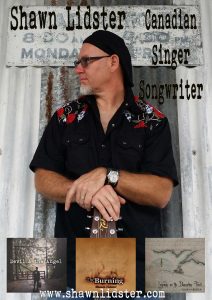 The gift of music has taken this Newfoundland, Canadian singer/songwriter on an up and down a voyage of some 17,000km to Australia.

Along the way he has followed his heart taken the time to let the dreams spirits and ghosts of the song lines lead him on his journey to Devil & the Angel.

As Rob Dickens from No Depression Magazine says “The Album covers say’s a lot.” Devil & The Angel is crammed with vibrant and colorful tales, the rolling ‘The Tailwind’, the tip-toe-ing of ‘Alive’ and the ambitious urgency of ‘Ned Kelly’ (Australia’s most famous bushranger) are but three highlights.

“Devil & the Angel” is a finely wrought selection of tasty originals sent express to the senses via intriguing and very versatile vocal, veering from twang, to gritty blues to gossamer tenor delivery. The lyrics are cohesive, rich and in detail. Producer Shane Nicholson swaddles all this in the most glorious suite of sounds weaving magic carpets of musicality. This Cd demands half a dozen listens to focus on each of its exceptional aspects individually.

This is a raw, earthy offering with musicianship and production that suits the nature of the songs.Highlights include Scratches, The Tailwind and Alive, but there are plenty of gems on this album.

Accolades for Devil & the Angel are still coming in:

Shawn Lidster’s sound travels great distances on Devil & The Angel, his first album in six years, from the kitchen party toe-tapping of the Canadian East Coast to a back-of-beyond version of Australian bluegrass, an amalgam of Dixie death march and cotton-field Delta blues. Lidster checks off a lot of roots and folk boxes on Devil & The Angel, with subtle Americana guitars filling space next to acoustic fingerpicked sensitivity, though Lidster performs more admirably when his lyrical content is strongest, as on Ned Kelly, ultimately proving that Lidster’s greatest lyrical strength might come in more narrative songwriting.

Scratches stayed in the Australian Radio Indie Top Ten Charts for 10 weeks Jan-March 2017. And will be featured in a new short film by Film producer Julian Grant.

Devil & the Angel  #5 at 2016 National Songwriters Awards under Folk Acoustic.

The Tailwind Finalist in 2015 Unsigned Only  both Folk Singer/Songwriter and Americana.

The Tailwind, Alive and Ned Kelly, have already been receiving airplay on some 60 plus plus community radio stations across Australia thru the Amrap Airit catalogue.

Mark on Me has been play listed on commercial radio in Newfoundland and Labrador Canada 103.9 Kixx Country.

The Tailwind and Alive added to Today’s Country 94.1 playlist Oct 2016.

Ghost, Sorry and Devil & the Angel have already made the cut into a new TV show called “Bucky” created by Kenneth J Harvey, which aired on NTV in 2016.

In the Wind has been featured in a Animation video by producer Julian Grant( Robo Cop) at the Art All Night International Film Festival in Trenton NJ, USA. Also to be featured at the Kinosommer Villach Open Air Film Festival in Austria.

Shawn has had songs he has written and performed for the Prime Minister of Canada, Premier of Newfoundland, Prince Charles and even had a song played on Hockey Night in Canada.

In 2014 with support from Indie Showcase Radio, Shawn showcased his songs in Oakland, California performing at the Far West Folk Alliance Conference playing at 7 different PGS Rooms, 11small shows in total representing the only Artist from Newfoundland Canada and Australia.

His Folk based Roots Music blends his Newfoundland Heritage with Australian charm into a mixed bag of Celtic/Alt Country/Blues captivated Artists and fans alike.

He has been ranked #1 on Reverbnation for his zone under Roots/Acoustic section for about a year and in the top 3 for years.

In 2013 Shawn released Ned Kelly (Acoustic) which made it too the AMRAP Great Southern Charts Top 10 and stayed there for 6 weeks in a row. “Ned” has become a fan favorite.

In 2010 his Cd “The Burning” was recorded in Australia at Bill Chambers Studio and was nominated for Country Album of the year by MUSICNL.

Tracks: “The Burning, Someday, Angel Comfort Me, Just A Number and In the End”, received airplay in Newfoundland and Australia and overseas.

11 original songs written about Family, The Past, The Present, The Future and home in Newfoundland, Canada.

Its Acoustic/Roots/Folk/Alt Country/Gospel and Blues all combined to showcase Shawn’s ability to express his feelings in different styles of music that he has grown up on and is influenced by.

In 2006 “Legends on the Baccalieu Trail” CD was nominated for Folk Album of the year by MUSICNL.

Shawn’s “Legends” Cd had been years in the making. He has done extensive research into the history of the Baccalieu Trail towns of Cupids, Brigus, Bull Cove, Harbour Grace and Carbonear. In addition to telling stories about the history of each of these towns, he has tried to capture the mood of each time period. The songs get right to the heart and soul of the characters he is reflecting upon, bringing the listener back to the era in which he is singing about. His ability to evoke the past of these towns illustrates his maturity as a songwriter.

In 2009, “Legends”, was added to the K-12 curriculum throughout Newfoundland & Labrador Schools as a learning resource for students

Cupers Cove the 1st track off “Legends” became the unofficial theme song for the Cupids 400 Celebrations in 2010.

Shawn was the opening act for the celebrations.

Tracks: “The Sealers Song, Newfoundland Summers Day, Carbonear Island, John Hawe the Pirate” all had extensive airplay on CBC Radio, VOCM and other popular radio stations in Newfoundland & Labrador across Canada and Internet radio stations around the world.

In 1995 Shawn met the Pale Riders (Tasmania) at Music West in Vancouver and was invited to come play in Australia.

So in 1997, Shawn jumps at the opportunity and became their opening act for the launch of their new CD and tour of Eastern Australia and Tasmania.

That same year Shawn entered a theme song competition for Sydney’s rock station Triple M and won $15,000 worth of Sammy Hagar’s (Van Halen) gear when his song the Ratso Man was chosen as the winner.

Shawn also tagged along with the Pale Riders when they were the opening act up for Midnight Oil’s Redneck Wonderland Tour.